The Senior Choreographic Project, a part of Temple’s dance program, is training students for life after college.

There’s no light on stage. Inside heavy wooden doors it’s bare feet on springing wood – demanding steps keep time with music. Shadows play up and down long legs and deep breathing does most of the talking.

Soon the seats in the small theater on the fifth floor of Conwell Hall are bouncing. Powerful steps and thighs smack the floor. It echoes in the room. The sound of movement reverberates in the theater, and for a fleeting moment after the music dies, it’s quiet again.

Someone offstage yells, “Do we have time to do that again? Yeah, let’s do it again, guys.”

When the lights go up, senior dance student Rebecca Brissette and her dancers in the showing on Feb. 27 take a final breath and trot offstage for a moment. This showing, one of four as part of the Senior Choreographic Project – the semester-long thesis project for senior dance majors at Temple – was a halfway point.

The project, a mandatory class during a dance major’s senior year, shows what dancers at Temple learn throughout their time at the university. The seniors are tasked with the concept of creating a graded eight-to-10 minute piece of their very own. This class is fit into a senior’s demanding and distinct schedule as part of Temple’s dance department. The goal is to equip seniors for what to expect in a demanding and competitive market outside of the university.

Brissette, one of nine in the program during Spring 2015, shifts nervously offstage. These showings are dress rehearsals for each senior in their work thus far. Each showing is presented in front of the whole class and the adviser for the program.

The lights go down and the dancers collectively inhale. They look into the few scattered pairs of eyes in the theater and then simultaneously bow their heads to start again.

“OK, take a breath. I want to hear you breathing this time. From the top.”

Welsh, a professor who has taught at Temple for the past three decades, specializes in African dance. She is the professor serving as the adviser for the Senior Choreographic Project this semester. 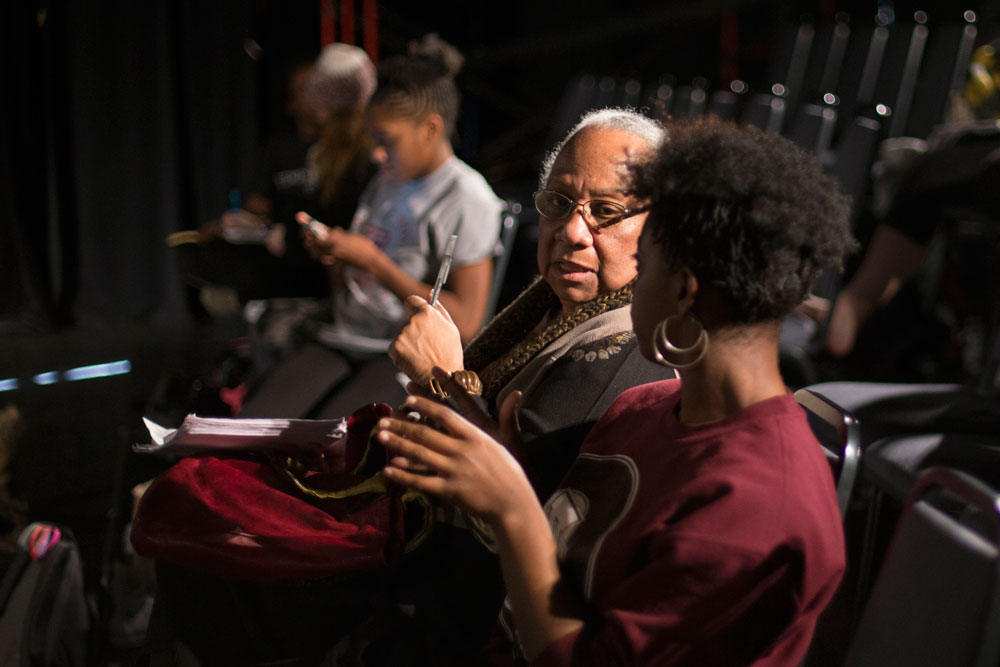 Dr. Kariamu Welsh consults with Sophiann Moore about the progress of her project during the Feb. 27 showing.

“In the African dance tradition, when someone has reached a certain level of expertise, they give them the title ‘Mama,’” she said, laughing. “So yeah, they all call me Mama.”

Welsh has overseen four classes of seniors in the program so far in her time at Temple. This semester will mark her 30th year at the university.

The specifics of the program are highly detailed – each senior is required to do all the work it takes to put on a full show. This includes auditioning dancers, choreographing the piece, making programs, marketing the show to students, coordinating schedules for their dancers, buying costumes, choosing music or having it composed, among other requirements.

The goal of the class, Welsh said, is just as much about the creative process as it is about the final performance. 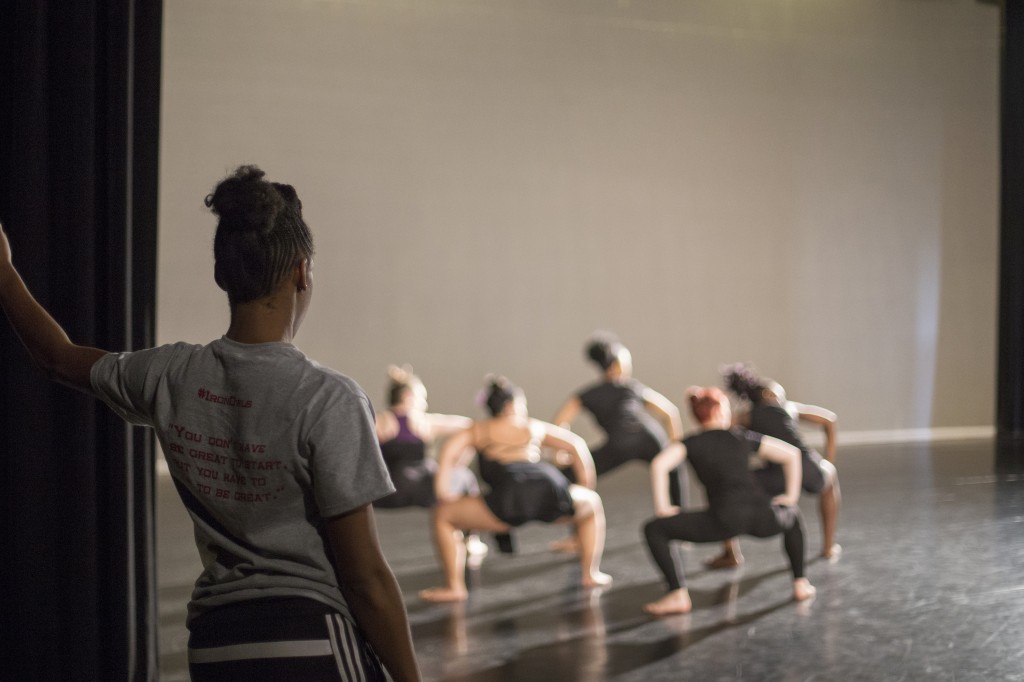 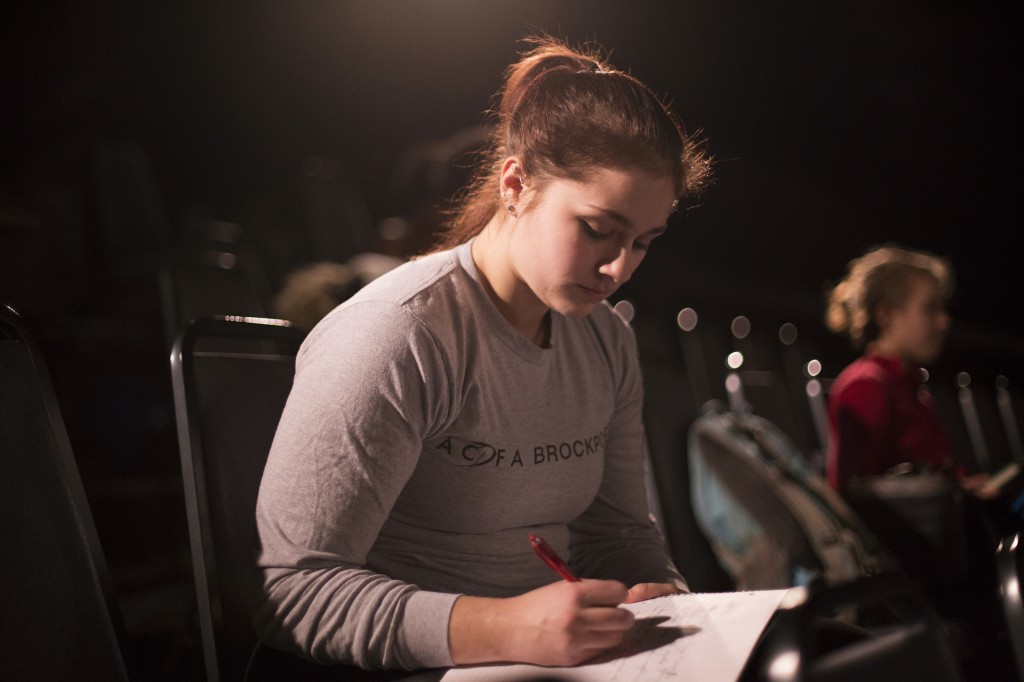 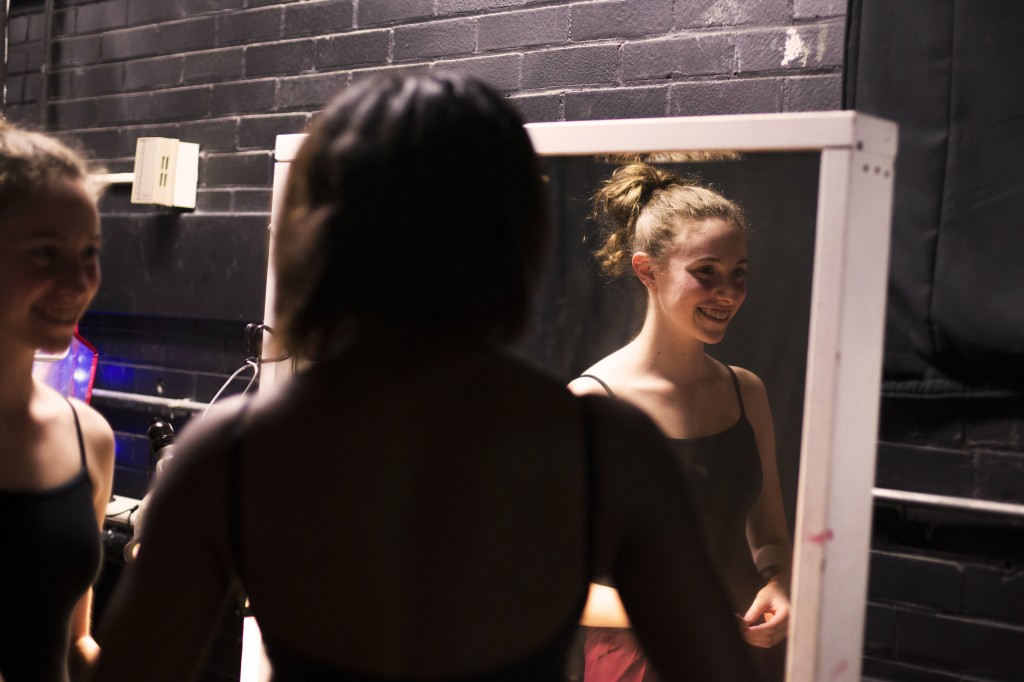 “I want them to have the ability to have what it takes to do anything creatively and the kind of intelligence it takes to work creatively not only in themselves, but others,” Welsh said. “I want them to be good citizens of the world. Regardless of their aesthetics, I want them to recognize skill and craft when they see it even if that’s not their own kind of craft.”

“I think for us at the department, it’s a way for us to send them off to their next challenge as prepared as possible in terms of what to expect in the dance world,” she added.

Danzel Thompson-Stout completed his Senior Choreographic Project last fall, a semester before his graduation date this May. The dance major and president of campus dance organization, Dare To Dance, titled his piece “Why Do We Try?”

“Life constantly happens,” Thompson-Stout said while looking into a mirror in a Pearson Hall dance studio. “I wanted to create a piece that felt that way. And my dancers got it. I had them think about why we try every day. What are the things that make you wake up in the morning and push through and want to be positive and progress in life?”

During the process of producing his Senior Choreographic Project last spring, Thompson-Stout said he learned the most from working closely with his auditioned and carefully selected dancers.

Welsh said advising seniors over the years has allowed her to see more than just what dancers at Temple learn in four years, but the kinds of dancers the project molds.

“For me,” Welsh said, “it’s a joy to teach them, to see their beauty, their inner strength, to see how these are going to be people to go out into the world and make some sort of change. That pleases me, it makes me optimistic. It brings me joy.”

On any average day during a semester, Brissette has eight to 10 hours of dance classes or rehearsals fit into her schedule.

Sometimes, Brissette said she runs across campus with minutes to spare, jumping from a technique class in modern dance to a math class in a lecture hall with little time to warm up and cool down.

“We literally have days where we’re running from class to class to class,” Brissette said. “It’s like, throw your clothes on and run back to class, take off regular clothes, put on dance clothes and warm up. It gets to be hectic.”

Her situation is not rare among dance majors at Temple. Dancers typically bounce between General Education classes and dance-specific classes.

Dodds said year after year she has to deal with scheduling problems because dance classes are “off the matrix,” or not on the set 50-minute or 80-minute class periods.

Dance classes are typically an hour-and-a-half long, due to how long it takes a dancer to prepare their body to engage in strenuous activity. This situation, however, complicates dance majors’ abilities to form coherent schedules outside of the dance department.

Sherril Dodds, the chair of the Department of Dance at Temple, said it is consistently a problem for students to piece together schedules that make sense for their bodies.

“As well as turning up for classes, they’re not just sitting still,” Dodds said. “They are doing lots of dancing, lots of physical activity. I think they have to really manage themselves very carefully. The same way you might have to look after a computer carefully, they will have to look after their bodies carefully.”

Dancers, Dodds said, have to negotiate how they can manage their bodies as a tool in their classes and put an emphasis on eating regularly, sleeping well and not over-committing to other physical activity.

Injuries typically occur with first-year dancers in the program, Dodds said, because they are not used to the rigorous amount of dance that Temple requires in the department.

“What we try to do is give them opportunities to learn about body conditioning, safe practice for the dancer and all of our instructors do that,” she said. “But I think it takes a while for students to actually really learn those skills.” 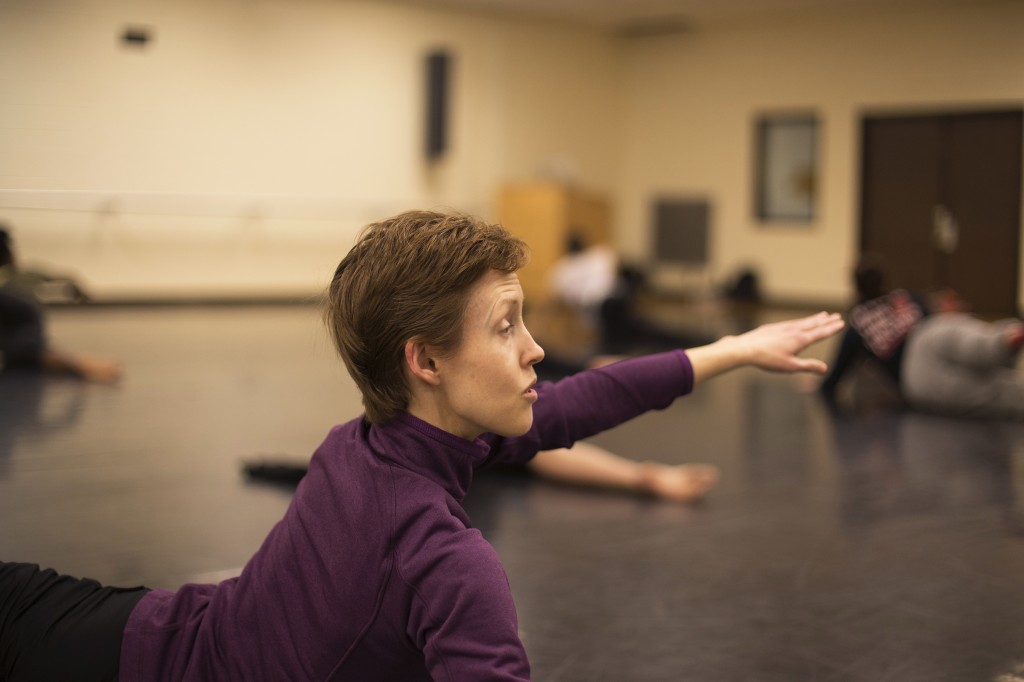 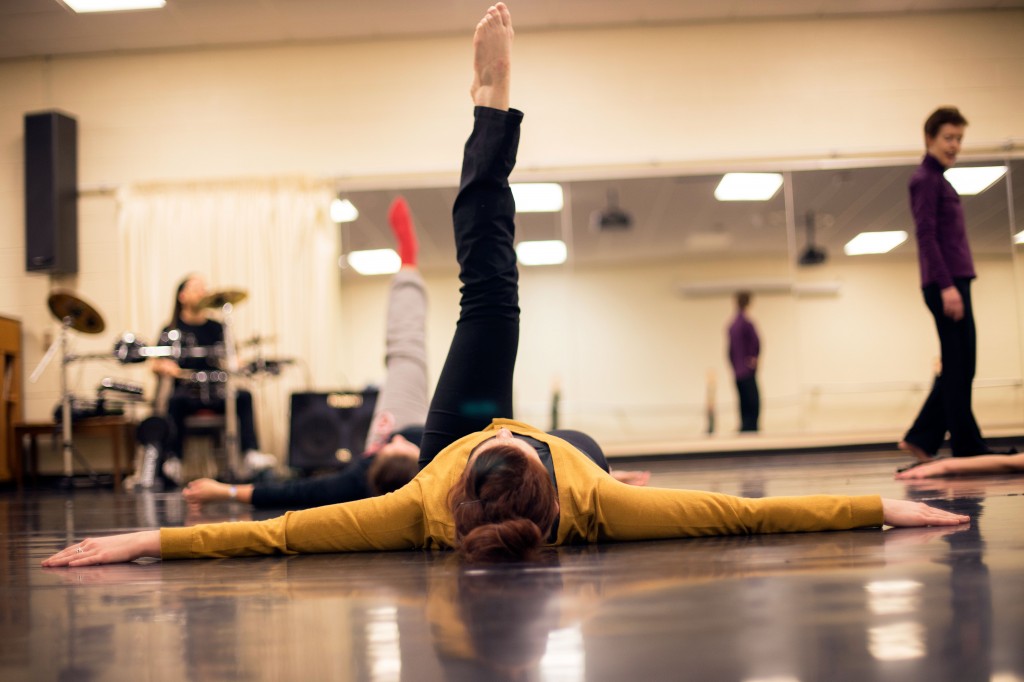 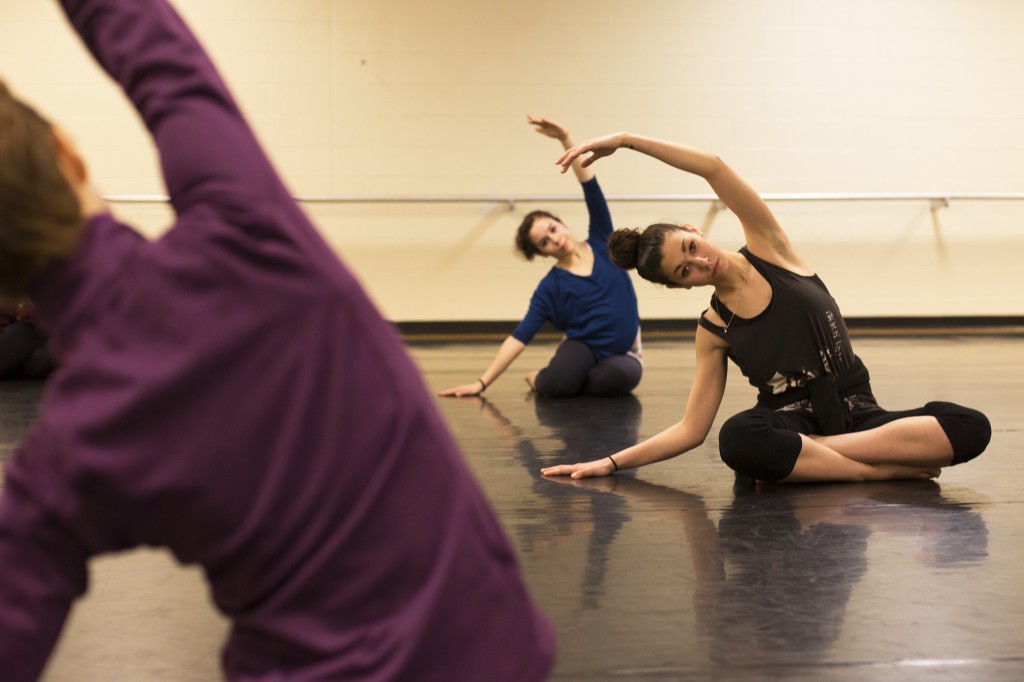 Jillian Harris, who specializes in technical dance as an adjunct professor and adviser for Brissette, said that dance students are “giving of themselves” in the studio.

“You are projecting feeling and emotion,” Harris said. “That requires a tight connection to the mind body and soul. … You get addicted to this in a good way. It’s intoxicating. It can be devastating if you’re derailed.”

Before coming to Temple, Dodds worked at the University of Surrey in Guildford, England. The difference between Surrey and Temple, she said, is that the Philly program is more of a fine arts program.

“Although students do reading, writing and thinking about dance, they also do a lot of that through studio work and students do have ambitions to be performers or choreographers,” Dodds said.

Many of Temple’s dancers, Dodds said, go on to not just be instructors or run their own dance companies, but to be performers in the competitive market.

“They’re not just puppets that can move really well, but they are thinking artists,” Dodds said. “That’s really where our emphasis is.”

Harris said Temple aims to equip students to understand the “logic of a full performance.”

“You have to be able to wear many different hats,” Harris said. “It’s not a field for someone who cannot multitask.”

Temple’s program is distinctive for dancers because the department does not require students to choose what kind of genre to explore, but rather encourages all dancers to dabble in modern dance, ballet and African dance. On top of that, students take improvisation classes, composition classes and theory.

Brissette said her experience with a non-limiting program broadened her horizons to make “not only a well-rounded technical dancer, but an artist.”

“I think it’s a whole different way of looking at dance,” Brissette said. “It’s not just what your body can do, but what it means and what other people can take from it. … I like that a lot about the program.”

Thompson-Stout said individual mindsets and voices, rather than an overall necessity to be put into specific genres of dance, was what made his experience with Temple’s program successful for his artistic growth.

“Dancing is more than just doing movement,” he said. “You’re telling a story, you’re putting yourself on the line. You’re making yourself vulnerable. You’re pretty much stripping yourself naked and saying, ‘Hey I’m here, this is me.’”

Brissette said after graduation, her entire career is up in the air.

“I am in Philly into August, but once graduation happens, I am pretty much going to every audition I can get to and figuring out a job,” Brissette said. “It’s a little scary, but I know I’ll get something. I just don’t know what yet.”

“Dancing is more than just doing movement. You’re telling a story, you’re putting yourself on the line. You’re making yourself vulnerable. You’re pretty much stripping yourself naked and saying, “Hey I’m here, this is me.’” Danzel Thompson-Stout

The competitive market in the United States these seniors are entering into has shifted from larger companies that hire full-time artists to what Dodds calls “pick-up companies.” These companies are often looking for “bright, young dancers who aren’t just able to dance in a particular way.”

Jobs are often obtained after a period of freelance work. In Philadelphia, Dodds said dancers are sharing resources in collaborative ways, so that dance is kept alive for young artists.

“I think Philadelphia is a really exciting place for dance,” Dodds said. “Philadelphia has a smaller population, but a real commitment to arts and culture. It’s much more collegial than some of the other bigger cities.”

The problem with the job market, however, is not uncommon to the arts in society in general, Dodds said.

“Dancers are always going to face the problem that arts aren’t well funded and well subsidized so they really have to carve out their own distinctive careers,” Dodds said. “Socially the arts aren’t valued enough.”

Thompson-Stout said the culmination of the skills he learned during the past four years and the Senior Choreographic Project was essential to shaping his perspective as an artist and to understand himself.

“I will look back at it to remind me of what I want to do,” he said. “I learned a lot from being here as a person, an artist, a man. My values are now more spiritual than statistic. I feel very well prepared.”

Emily Rolen can be reached at emily.rolen@temple.edu and on Twitter @Emily_Rolen.

Photos and video by Margo Reed.