The growing number of students living near Main Campus can have “competing interests” with the community, an administrator said.

For much of its history, Temple was known as a “commuter campus” — most of its students hailed from Main Campus’ surrounding neighborhoods and the city’s suburbs.

As time went on and Temple’s student population grew, the university’s footprint did, too. In 1957, Temple had 17,842 students, half of which were full time, according to university historian James Hilty’s book, “Temple University: 125 Years of Service to Philadelphia, the Nation, and the World.”

But Peabody, Johnson and Hardwick halls, along with the townhouses that now stand at 1810 Liacouras walk, were the few sources of on-campus living and only accommodated a few hundred students in the 1960s and ’70s.

In the last few decades, Sean Killion, an associate director in the Office of Residential Life, said there’s been “a real shift” in the student population.

Across the country, students sought a different college experience: one that included on-campus living, student clubs and organizations and an investment in the neighborhoods they lived in.

In 1991, Temple founded its Student Affairs office, which fulfilled many of the amenities new students were looking for. The university began competing against other institutions to provide an ever-improving “campus experience” with a residential population, Killion said.

“Temple definitely experienced a lot of that [change], in that time frame,” he said. “Over a 25-year period, you see the growth in buildings like 1300, 1940, Morgan Hall, White Hall. They were all added in that span.”

These additions were part of the “university’s strategy” to cement Temple’s status as a place for students to get the full college experience, Killion said. Morgan Hall, which opened in 2013, was another answer to the call for more housing and upscale amenities. It was also a push to keep students on campus.

Still, the university only has about 5,700 beds on Main Campus through Residential Life for students. Killion estimates that at least 7,000 students seek off-campus housing in the surrounding blocks of North Philadelphia. It’s possible there’s more, he added, since it’s difficult to measure once students make the move, usually after their freshman years.

As interest in on-campus living increases for underclassmen, how does Temple keep up? And how do the surrounding neighborhoods make room for a growing student population that wants to live off campus?

When Emily Nice finally decided to come to Temple last spring, she logged on to the university’s MyHousing portal to book herself a room. But the now-freshman bioengineering major found out she was too late — the university was out of spaces.

A few weeks later, Temple began accepting reservations for rooms in The Edge, an apartment complex just off Main Campus on Cecil B. Moore Avenue near 15th Street. Nice quickly secured a spot. 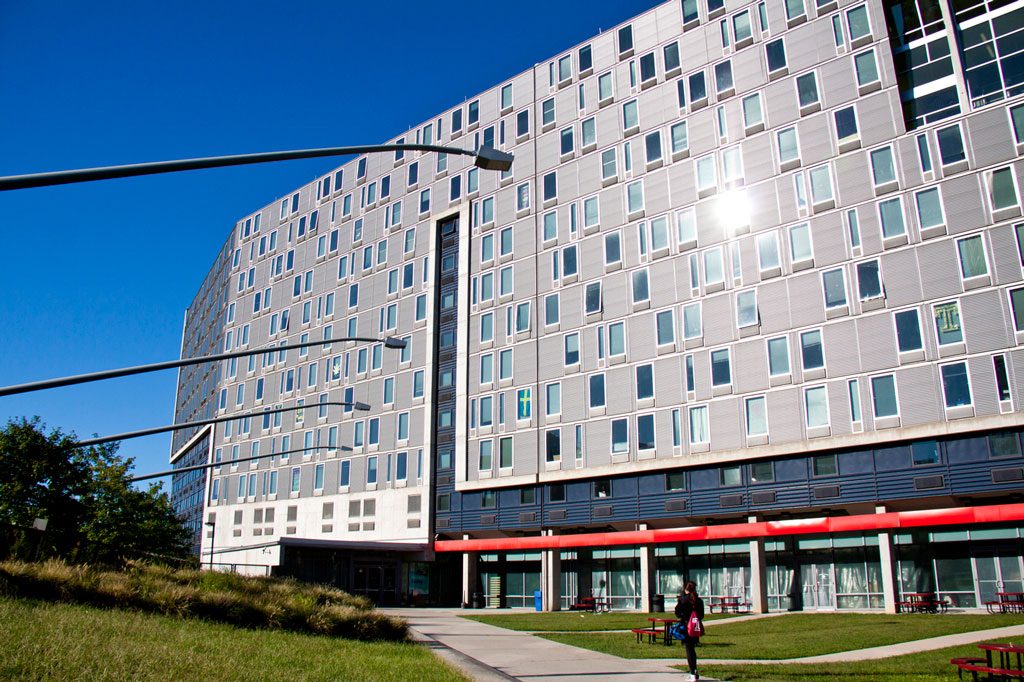 “I was kind of nervous about it, and I didn’t want to wait, so I just signed up to live here,” she said.

Nice’s experience isn’t unique. This school year, to compensate for a lack of housing in residence halls, Temple is leasing about 300 beds from the Edge to house students who are seeking the on-campus option. Each floor has a resident assistant who follows on-campus programming and services. Each resident signs a housing contract, like any on-campus dweller. But, technically, they are living off campus.

Beech International Village, on Cecil B. Moore Avenue near Sydenham Street, has also been transformed into an option for those seeking on-campus living, or something close to it. In past years, Temple has filled many of Beech’s apartments with first-year students or transfers looking for a dorm experience. Until this year, many residents were not students.

During the 2017-18 year, every bed at Beech will be filled by a Temple student, Killion said.

“On-campus housing is on a first-come, first-serve basis,” Killion said. “You are not guaranteed it.”

Killion called the process a “lottery,” where it’s likely students who commit to Temple late — either incoming freshmen or transfer students — could be out of luck in late spring. 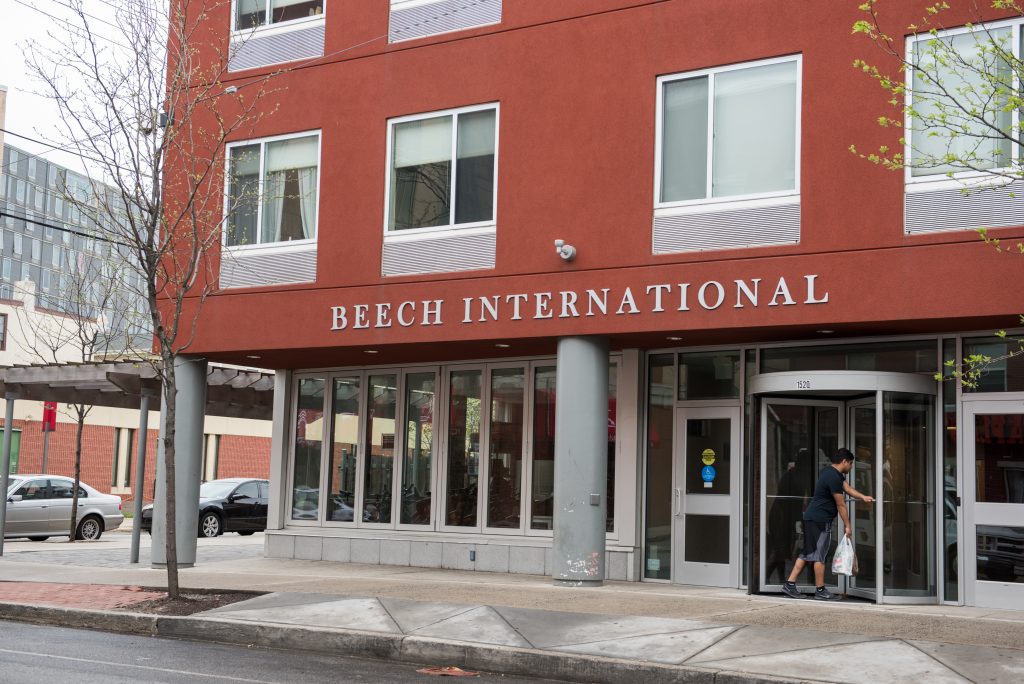 Next year, all rooms in Beech International Village will be filled by students. BRIANNA SPAUSE | PHOTO EDITOR

The beds available at Beech and the Edge were obtained through a contract with the university and are priced to students at a rate “comparable” to residence halls, Killion added. A standard suite in the Edge costs a student $3,350 per semester, while Beech costs $5,400. These rates are comparable to Johnson and Hardwick Halls, or Morgan Hall, respectively.

“I don’t know if it is much different from living in a dorm,” Nice said of her experience in the Edge. “I have a roommate, I know some people on my floor, we still have RAs.”

“There’s a few people that are definitely older,” Nice said. “But there’s definitely a lot of students.”

There are at least 7,000 Temple students living off-campus on the blocks surrounding Main Campus, and thousands more in a three-to-five mile radius, Killion said.

Though it can be difficult to quantify how many students are renting houses close to campus, The Temple News examined records from the city’s Office of Property Assessment to learn more. Of the top 10 private property owners in the 19121 and 19122 ZIP codes, four have “Temple” in their names. Templetown Realty, which caters to students who want to live near Main Campus, owns more properties than any other private entity in the two ZIP codes, according to the records.

The city’s log of building permits from the last 10 years shows nearly as much construction around Temple as other property-booming areas like Northern Liberties, Fishtown. And the census tracts — which the U.S. Census Bureau draws to roughly represent neighborhoods — encompassing and bordering Main Campus have disproportionately more multi-family housing than other areas of the city. Besides areas in University City and West Philadelphia, no other census tract in the city has as much multi-family housing as the tracts around Main Campus.

The city dataset shows that private developers in the area are mostly building apartments for students. The highest volume of property ownership and construction in the area overall, though, is from city agencies like the Philadelphia Housing Authority and the Philadelphia Redevelopment Authority.

The city’s Licenses and Inspections department is currently looking to build an office near Temple to better monitor the influx of building license applications in the area, spokesperson for the Mayor’s office Ajeenah Amir said.

“The City is putting lots of resources into monitoring construction and building safety in that area. In fact [the] City is actively looking for space for a new L&I field office for the Temple area because there is so much development in that area,” Amir told The Temple News.

If he felt comfortable, Harry Lepore would have found a place to live off-campus during his freshman year at Temple. He instead lived in Johnson Hall.

“I wouldn’t have even lived on campus freshman year,” said Lepore, now a senior legal studies major, living off-campus on Norris Street near 15th. “But how are you going to make friends if you don’t?”

Senior entrepreneurship major Zach Bandurick lives in a seven-bedroom house on Norris Street with Lepore. They are renting from Templetown Realty. Bandurick said he wanted to live away from campus for social reasons. 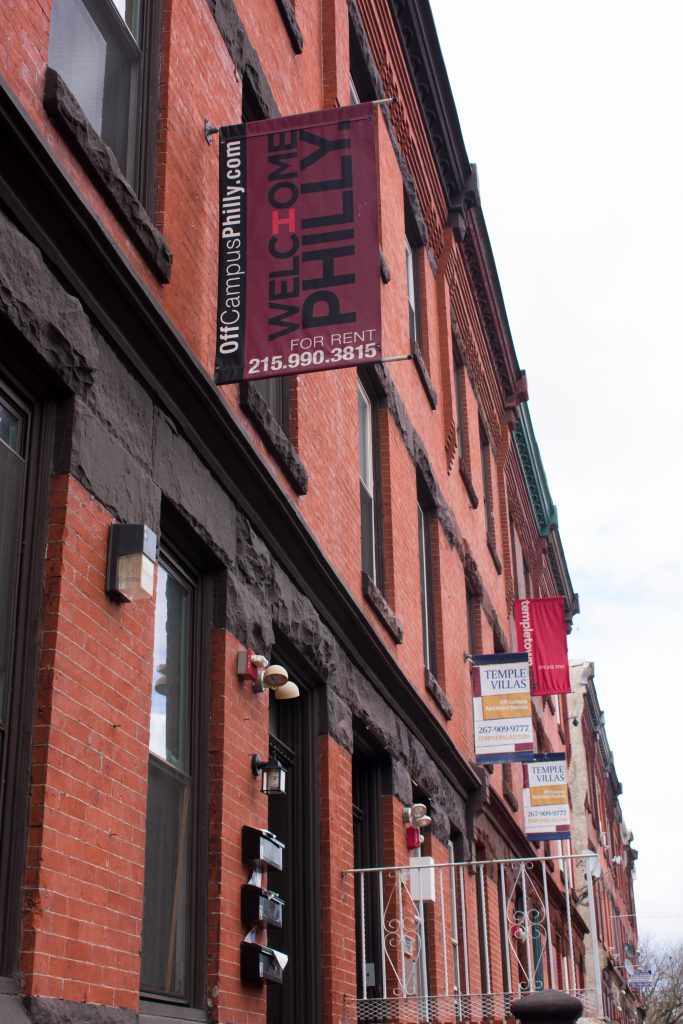 Rental signs adorn many of the houses on Diamond Street between 16th and 17th streets. NICK SEAGREAVES FOR THE TEMPLE NEWS

“I have a lot of friends,” Bandurick said. “I like to have them over. It met my needs. Large house, large backyard, large basement.”

Megan Casey had her housing deposit down as soon as she was accepted to Temple this spring. Her parents wanted to make sure she lived on campus during her first year in Philadelphia after transferring from James Madison University.

“If it’s your first year on Temple’s campus, it does have a reputation as being unsafe,” the freshman neuroscience major said. “They were really pushing me to live on campus.”

The only available Temple housing for Casey was in the Edge, so she decided to explore other options. When she visited Temple, she walked around the outskirts of campus to find alternative housing. She will live in Kardon/Atlantic Apartments on 10th Street near Montgomery Avenue.

After choosing Temple in Spring 2015, Patricio Medina found himself in a situation similar to Nice’s. He was interested in residence halls like Johnson & Hardwick and Morgan Hall South, but by the time he found out how to book a room, they were all filled.

“I had to figure it out on my own,” said Medina, now a sophomore international business major. “They were offering student housing at [Beech International], but I didn’t like that place. It wasn’t for me.”

Medina and a friend he met on Facebook decided to live in Oxford Village, a group of off-campus apartments on 15th Street listed on the Off-Campus Services website. The two were enticed by the lower price and the increased “freedoms” the apartments presented.

Oxford Village is one of the four off-campus living spaces the university has vetted and endorses to students as a similar option to a residence hall. University Village on 10th Street near Montgomery Avenue, Kardon/Atlantic and Beech are suggested because of the front-door security guards and building managers.

The Office of Off-Campus Services exists alongside the Office of Residential Life to teach students about their leases, rights and responsibilities and being a “good neighbor.” The Good Neighbor Initiative was started by Student Affairs in 2011 and encourages students to be aware of their neighbors who live in the neighborhoods near Main Campus.

Killion acknowledged that students don’t always follow these instructions, and partying and other behavior can be disruptive. 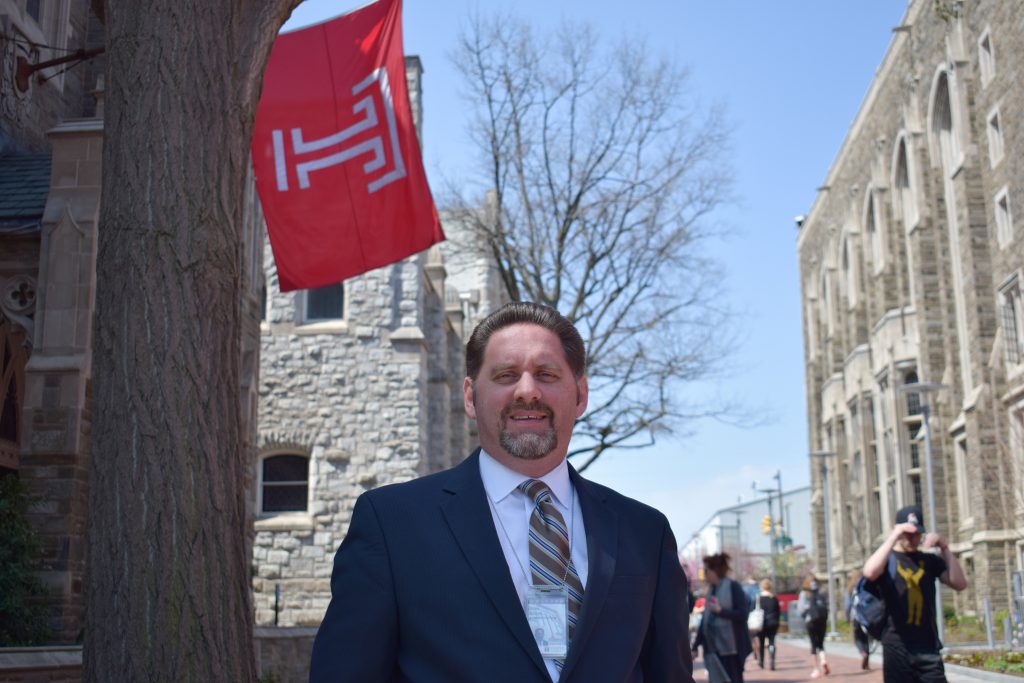 Associate Director of Residential Like Sean Killion said while some students seek on-campus arrangements, many opt for off-campus housing. MICHELLE GOLDSBOROUGH FOR THE TEMPLE NEWS

“There is that competing interest there,” Killion said of students living next to long-time residents in North Philadelphia.

“As a homeowner, I would certainly understand,” he added. “I live next to Holy Family University, and God forbid, a bunch of college students moved in next to me, buying up property in our area and partying and then I saw all this stuff start happening. I might feel and respond the same way maybe our neighbors feel.”

But, at the end of the day, he said, it’s not the university’s responsibility to make students behave.

Click to read PART II exploring the perspectives of community leaders and residents.

Paige Gross, Owen McCue and Joe Brandt can be reached at editor@temple-news.com or on Twitter @TheTempleNews.